You might have noticed I am taking part in the Write Tribe Festival of Words, where you write a post based on the day's prompt. Yesterday's prompt was one of its kind where it asks us to learn new words and their meanings.

I remember when I was young I had developed a habit of reading the dictionary to improve the vocabulary and learning new words. But that stopped right after school, i really dont know why I stopped it.

Anyways I took up Corinne's Challenge of learning seven new words and using them in the post. I need to confess i knew only two out the seven! But I enjoyed the entire exercise.  I'll list the words below with their meanings followed by the short story so it's easier for you. You might feel its long but believe me it isn't just about 1K words! So enjoy. 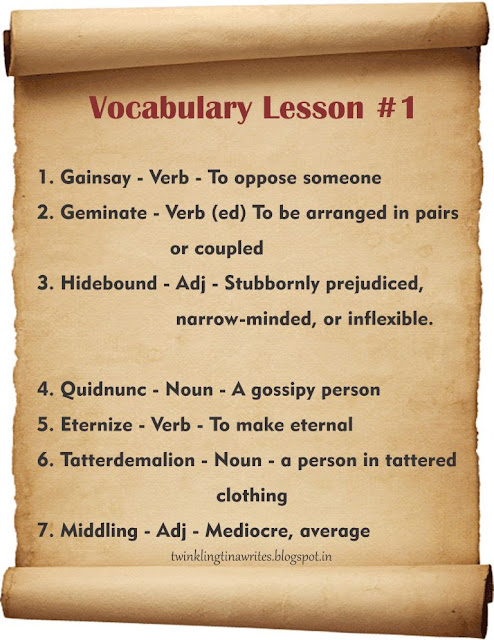 The drive wasn’t a very long one from New Delhi, in just under four hours they were nearing the Kalara village. The dusty roads, patches of farm land, unkempt houses made the village look no better than middling. This was the very place where Jasleen’s parents belonged to. After the recent revelations about her parent’s deplorable death she had no other choice but find out the truth. All her life Jasleen had believed her parents were taken away in a dreadful accident. Harish whom she fondly called ‘kaka’ was her only family. Harish had performed all duties of a mother and a father single handedly ever since his dear friend Rajesh had left little Jasso in his care fourteen years back. But Rajesh and his wife never came back. His worst fears had become true and he vowed not to open that chapter again. Not until his little Jasso was old enough.

“Is this the place?” she asked inquisitively.

Jasleen’s mother, Preet belonged to the famous Maan family of the Kalara village. Her family since ages were the Thakurs and demanded great respect across the land. No one dared to gainsay Ram Singh Maan, the head of the family and Preet’s uncle. This land was famous for their strict rules and following their age old traditions.

Harish belonged to a neighboring village and had met Rajesh in Delhi when they were quite young. The newly married Rajesh had just moved to Delhi and had taken up a room next to Harish’s in the dilapidated colony. Within a year their little daughter was born and they were a happy family. Harish never heard them speaking about their families in their ancestral village. It’s only when he had asked they had mentioned the name of this village and the ordeal they had faced in their village.

“Do you know there house?” Jasleen’s question brought him back from his deep memories about the night when Rajesh came knocking at his door looking overwrought.

“No it’s the first time I’m visiting this place” he said shifting back to recalling his last meet with Rajesh. They had heard about Preet’s ailing mother and as a last wish she had wanted to see her daughter. Quite unwillingly Rajesh had consented in the visit.

“Should we ask someone here?”

“I think we need to find someone”, he said searching for someone to ask the whereabouts of the Maan family.

“Are you sure? He looks like a fakir, I don’t think it’s a great idea” replied Harish looking skeptical.

“You only asked me not to reveal my identity, who better than this man, I don’t think he will ask too many questions” she replied while getting down from the car and walking towards the tree. Harish quickly parked and followed suit.

“Baba do you know where the Maan family lives?” she asked gently

He looked up to her squinting his eyes in the harsh afternoon sun.

“The Maan family, do you know where their house is?” she asked again.

“Why do you ask?” asked a feeble voice.

“I am doing a documentary film on villages of India, I need to visit old traditional families that is why I ask” she replied keeping in mind the cover Harish had developed for themselves.

“You are making cinema? Will you show the truth in your cinema?” asked the dilapidated man with hopeful eyes.

“If you show the truth I’ll tell you where they live”, gesturing her to sit beside.

With her video camera in hand Jasleen and Harish settled down to record the statements of the decrepit man.

“I haven’t been like this always, I have seen better days in life. I was a farmer and had a family. I had a beautiful wife and a son. We were happy in lives. My son was good in farm and went to school. He was popular in the village because he used to sing well and was often called to sing in the village fair. I didn’t have lot of money but I sent him to the Govt. college in the nearby town along with the children of the affluent of the village. It is there where he geminated with the girl of the Maans’. They had grown close in spite of knowing the hidebound tradition of the society here. You know how young blood is. They don’t think about anything.”

“And… what happened?” she asked with a quivering voice.

“The Maan’s got to know from the bunch of ladies at fair, the good for nothing quidnuncs about their relation. They threatened to kill my son, I don’t know what they did to their girl”

“And he just kept quiet?”

“My son was deeply in love, he fled somewhere with the girl and I didn’t see him for a long long time. The Maans took away my land and house. They didn’t leave me with anything. They had made our lives a hell. They sent men across villages to look for their daughter, I heard they went to the big city also”

“Did your son ever come back?”

The feeble man’s eyes started welling up. With a trembling voice he continued. “They tricked him to come back. They sent out false news of the girl’s mother’s ailment. They were back in the village after two years. My eyes had strived long to see my child. But when they were back the Maans lynched them to death. They had hung their bodies from this very tree. My wife died of grief, I was left with nothing. My world ceased to exist with their demise.

These Maans are demons, they are hardlined conservatives. In the name of tradition and honor they kill people. It’s fourteen years since their death, their only mistake was they fell in love. Hope they are well wherever they are and their love is eternized.

Beta now you know about the Maans, will you show the truth in your cinema?”

With trembling hands Jasleen reached out to wipe the tears off the old man’s cheeks.

“Yes Baba I will, only if you promise me you’ll come with us.”

“But why? Why do you want to take an ailing man to your home?”

“Because I am your son Rajesh and daughter-in-law Preeto’s daughter, Jasleen”

The name Rajesh left the old man speechless. His trembling hands reached out to hold Jasleen’s hand. He didn’t want to stop his tears today.

As he settled down in the car with Harish and Jasleen a ray of new hope shone over his black and white life. 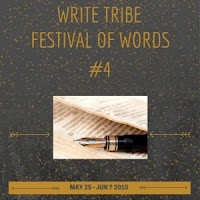 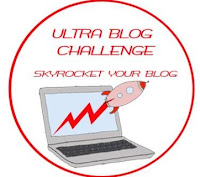