What is in a name? I say every bit is in it.#MondayMusings

Check below for the #MondayMusings linkly.

“What's in a name? That which we call a rose
By any other name would smell as sweet.”

It sounds polite, wise and profound doesn't it?

But when you put yourself in that very place – when you are the subject does it sound so prudent?

It is true that a name doesn't make you the person that you are going to be, nor will it decide your personality, but it definitely is going to be your identity. Now if you have a difficult name – as in an uncommon name which is difficult to pronounce you will understand every bit of what I am trying to say.

Parents, as sweet as they are, go overboard in excitement to find the most uncommon and the very special name for their little ones. But what they fail to realize their little ones might endure a dilemma of a lifetime explaining their names when they grow up.

I have gone through it most of my life – I still do – so no one knows it better than me.

My mom had originally named me Tina as the good name, because she liked the name. But then you have an entire family waiting to name the new born! This is some sort of a custom in Indian culture that choosing a name is a big affair. Some consult astrologers on what the starting letter should be, some numerologists on how many letters should be in the name and what not. Thankfully my extended family members didn't resort to consulting them but they definitely opposed me having an English name and that too such a short name!

I mean really?? What was wrong with the name Tina? So after all the discussions, deliberations and considering I was given a good name which is SARANI. People in the family were happy. It sounded very Bengali, it wasn’t too short, and it wasn’t that common too. Only they didn’t realize what was coming up next when I’ll get into school and college! Tina, however, remained my pet name.

Bengalis and other Indian communities are quite famous for having distinct names specific to their communities. When I was in school at least 80% of the girls’ names had something to do with ‘dev’ or ‘deb’ as we call it in Bengali. [It means God in Sanskrit]. So most common names were Debjani, Debomita, Debosmita, Debdutta, Debina, Debopriya, Debanjali and loads of other ‘debs’.

Just when everyone was happy with the debs and debis in their names – I had an enormous task explaining people what my name actually was. Sarani, means a continually flowing river (I got to know that from some Bengali dictionary, much later) and it is pronounced as Sha–ro-ni (yes that famous Bengali way of rolling your tongue to pronounce O) but it is spelt the way it is written in my school ID or the passport - SARANI.


So by default any Bengali who read my name called me Sarani as is Sho-ro-ni , yes a road!!! It is a monumental task correcting everyone every time what I am supposed to be called. And I hated being called a road!

Things became worse as I joined college and university with a more cosmopolitan population. There it was difficult for people to pronounce it altogether. So I resorted to my pet name and it was easier for people – and a relief for me. I, however, had a professor in Bangalore who is Bengali by birth and she was the only one who was kind enough to get the correct pronunciation.

When I joined work I conveniently became Sarini, Shalini, Sayani, Sharni, and what not. People called me anything that they found easier to pronounce. So I resorted to introducing me self as “Hi I am Sarani, (with the correct pronunciation) I know it’s difficult for you, you can call me Tina.” And those who (the external vendors that I deal with) wanted to give extra respect and extra effort started calling ‘Sarni mam’. And I had to be content with it. It saved me a great deal of explanation.

If I start counting how many variations there are of my name I don’t think I’ll be able to count in fingers! But for some reason I have not officially changed my name! But yes I have gone ahead and published my anthologies as Tina Basu. I didn’t want the readers to keep guessing the name!

It’s my heartfelt request to parent’s please think what your little bundle of joy is going to endure when you give those nice and unique names.

I am pretty sure when I need to name my baby, I will put my foot down in choosing an easy going name. I don’t want my child to suffer this namely dilemma. I am not sure where he or she will settle down finally, but I need to give him or her little freedom of introducing themselves freely without having a baggage to explain their names!

What do you think? Have you had a dilemma with your name like me?

Okay now no more dilemmas for today. I am hosting the #MondayMusings with Corinne as promised earlier. This is the first time I am hosting such a thing for my blogger friends. And I invite you to write and link – up below in the linkly.

Here’s what you need to do.

1.Write a post sharing your thoughts on a subject of your choice. Make it as personal as possible.

2. Use the hashtag #MondayMusings and link to Write Tribe.

3. Add your link to the linky which you will find either on Write Tribe or in here, below my post.

4. Use our #MondayMusings badge to help other bloggers join in too. 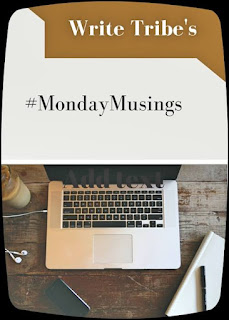 If you like my blog and posts that I write CONNECT ME ON SOCIAL MEDIA and never miss a post.