Hello people, this UBC is doing quite good to me, it is making blogging and writing a habit than a hobby! I am infact, happy that I am in the second week of the challenge without missing a single day! And I am reading such good content, so much talent around makes you push yourself a little harder.

Okay, I made a little page called Blogs for Bloggers, do check it out. You might get some useful links, some awesome posts and some super sites for a blog hop party!

Going with the Blog hops, today's post is for one such site. I am writing a short fiction today on word prompts. Here you go.

You can red my earlier short fictions here.
That Morning Walk

Nirvan was back in his village after two decades. He would have stayed out of this place had his father not passed away.

Not much had changed in this village – the poor roads, poor transport connection, poor electricity.  Villagers still didn’t want a girl child and felt her birth in a family brought bad luck.

He hoped this one week will pass by soon without any incident and he can be back at the city.

However, his family was visiting his ancestral village or the first time. His teen aged daughter was awestruck to see the lush green sugarcane fields and the beautiful moist breeze, something that she had never experienced in her polluted and crowded city.

She loved taking the long walks by the lake in the morning along with her brother. Nirvan was not happy with this idea, but this morning, seated in the police station, he wished he had set down some rules for his daughter, much against his wishes or values.

His daughter was abducted by three men this morning and her brother beaten up when he resisted. While waiting for the officer to turn up, Nirvan felt so insignificant, so helpless. He kept praying for his daughter’s safety. The beetle-leaf chewing officer hardly lent an ear to him. He was instead asked to meet the ‘Panchayat’ [village head man] head.

While at the headman’s house Nirvan noticed, his thirteen year old boy behaved odd in front of the headman’s son. Nirvan tried speaking to his son, he tried hard if Nimit could divulge any thing… anything that could help him get back his daughter.

Pointing towards the headman’s son Nimit started howling, in a way that took everyone by surprise. Nirvan felt, there was something to do with this fellow. Nimit revealed he was one of them… one of the boys who had held his sister this morning.

The headman tried resisting the police raid using all his powers but Nirvan and his family was determined to get back their daughter. Nirvan sweared, once he got back his daughter, he will never put his foot in this godless land. He was better off in the city. But his hope was short lived, his world came crashing down when the police recovered a violated and mutilated body of Nisha from the store room.

Linking this post to Three Words Wednessday, where you need to write using the three word prompts. This week the prompts were - Divulge, Insignificant & Godless. 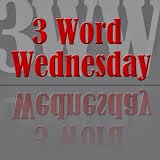